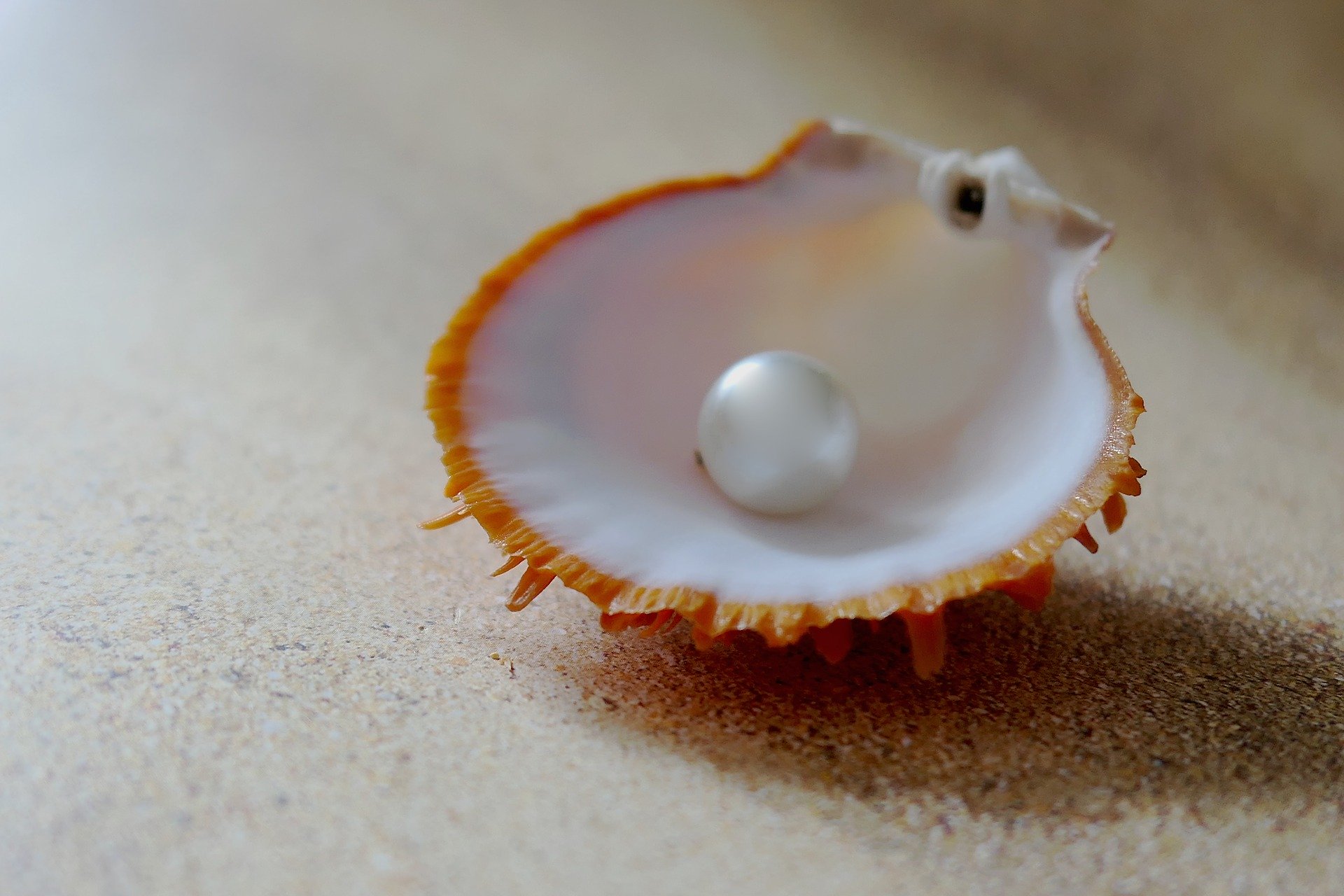 ‘Cartier was not the first to sell natural pearls, but the brand may have the most memorable backstory in relation to them. In 1917, Maisie Plant, wife of businessman Morton F. Plant, fell for a double strand of white natural pearls at the French jeweler. The price? $1 million. At the time, her husband was looking to vacate his 653 Fifth Avenue residence, so he negotiated the exchange of the building for the necklace. Cartier’s venerable New York boutique is still there today, all because the soft luster of rare, natural nacreous pearls caught the eye of a collector.

While the origin of those famous pearls is debatable, a photo from the turn of the century shows Jacques Cartier mingling with pearl dealers in the country where natural pearls are the most abundant: the Kingdom of Bahrain.

The archipelago nation, which lies between Saudi Arabia and Qatar on the southwestern coast of the Persian Gulf, comprises more than 30 islands. Diving for natural pearls and trading them internationally has been integral to its history for more than 4,000 years, according to Yaser Alsharifi, board chairman at the Bahrain Institute for Pearls & Gemstones (DANAT), who spoke during the 2019 CIBJO Congress in November.

More than a third of Bahrain’s population was involved in pearling in the 1920s, related Khalid Al Rumaihi, CEO of Mumtalakat, Bahrain’s sovereign wealth fund. The number shifted with the advent of the cultured-pearl industry in the early 20th century and the rise of oil jobs in the region, both of which caused the natural-pearl market to plummet. In 1928, Bahrain banned the import and sale of cultured pearls — a ruling that is still in effect, though residents may own them in private collections.

In the last 10 years, however, the cabinet has spent millions to reinvigorate the Bahraini pearl trade in hopes of boosting the country’s economy. Under the leadership of Crown Prince Salman bin Hamad bin Isa Al Khalifa, it renovated a 2-kilometer stretch of properties and pathways in Muharraq that traces the history of Bahrain’s pearl industry. Dubbed the Pearling Path, the project became a UNESCO World Heritage Site in 2012. In 2017, the government unveiled an official pearl-revival plan to drive new interest in the sector and help the country move away from oil dependence. As part of that plan, the Ministry of Industry and Commerce under Mumtalakat privatized its 30-year-old in-house gemology lab, which became DANAT. This move gave the lab the flexibility to direct research efforts on wild oysters and foster success among pearlers.

“Bahrain worked hard under the guidance of [his] royal highness the crown prince to revive the pearl industry,” Dr. Mohamed Bin Daina, chief executive of the country’s Supreme Council for Environment, recounted in November at DANAT’s first international Pearl Symposium. “This is not just a tradition, it’s diversifying our economy.”

The differences are vast between the natural nacreous pearl industry in Bahrain and the farms that exist worldwide for cultured pearls. Natural pearls, by definition, are created without human intervention. They form when naturally shedding epithelial cells land in an oyster’s soft tissue — often alongside other micro-irritants — and the oyster creates a protective sac that secretes nacre to soothe the intrusions, according to Shigeru Akamatsu’s Pearl Book.

Cultured pearls, in contrast, grow when donor tissue is implanted into the oyster’s soft tissue, often with a mother-of-pearl bead, to stimulate the nacre secretion in an artificially initiated pearl sac.

Cultured pearls are more abundant because they are farmed en masse. Natural pearls, including those from Bahrain, are rare; they are unplanned, and divers find them by chance.

“If you collect 1,000 oysters, on average you will find one pearl in every 50 oysters,” says Prof. Robert Carter of University College London’s UCL Qatar program, who also spoke at the symposium.

A total of seven different oyster species exist in Bahrain, according to Dr. Hashim Al Sayed, associate professor of biological oceanography at the University of Bahrain. “The Pinctada radiata is the most common,” he told the symposium attendees. This species has largely white mother-of-pearl lips that determine pearl color, though it does yield the occasional gray, black, pink or silver pearl.

In Bahrain, the process of finding natural pearls is as historic as the industry. Divers are either hobbyists or self-employed. Government data for this field is limited, but anecdotal evidence reveals that full-time divers are rare, and most free-dive in waters ranging from 65 to 213 feet deep — though deeper oyster beds exist further from land.

Ali Mansoor Abbas, the Supreme Council for Environment’s senior environmental specialist, says there are currently 3,000 licensed divers in Bahrain, though the country would love to see that number grow.

“In the old days, we had up to 5,000,” recollects Mohamed Abdul Razaq Al Mahmood, who regularly buys loose pearls from divers.

His family, which owns Al Mahmood Pearls, is one of the four established pearl-buying families in the country, with a history dating to 1920. No one actually owns the pearling beds; anyone who secures a license, including tourists, can dive for pearls, he explains in a private visit at his residence, a sprawling compound spanning several city blocks and encircled by high walls.

“Bahrain is the only country in the world where you can dive for pearl oysters,” adds DANAT CEO Noora Jamsheer.

To date, there are six scuba centers that serve tourists who want to do so. Visitors can collect up to 60 oysters per trip, while resident divers have no limit because of the oysters’ widespread availability in the country.

What makes Bahraini pearl oysters grow so abundantly? Abbas’s research points to shallow waters that ensure ample light on the beds, as well as good salinity and a high number of parasites oysters can ingest during the filtering process. “Warm-water parasites are good for producing little pearls,” he explained at the symposium. In addition, the warmth of the water encourages oysters to reproduce, there are no typhoons or rough oceans to disturb the beds, and there are few oyster predators (such as octopuses) in the Gulf. “The only real threat is the diver,” Abbas noted.

That said, there are beds that remain largely untouched since the 1950s, according to Carter — though Bin Daina’s conversations with Bahraini microbiologists confirm that harvesting actually helps keep the beds at a healthy rate of population growth.
“The pearl oysters grow above each other, and they kill the [next] one down” if it’s not harvested, he said during the symposium. “The more you collect, you will regenerate more oysters, so it is a sustainable source of jewelry. We are protecting the environment.”

And guidelines do exist. Oysters must be at least three fingers big to be plucked from beds, says Carter. This move ensures that spat, or young oysters, have a chance to develop.

Estimates on the number of pearls found annually in Gulf countries vary widely, from one million to 50 million. DANAT tests upward of three million pearls a year to determine whether they are natural or cultured, according to Jamsheer — though this includes specimens from other countries, and the lab does not keep track of how many are newly acquired as opposed to estate.

There’s also no way to know how many pearls divers have held onto in hopes of getting better prices down the road, possibly outside of Bahrain.

“We need standardized pricing for our pearls,” declares diver Al Slaise. “More Bahrainis would return to diving if they could get better prices than they do for fishing.”

Reaching more consumers outside of the kingdom is a priority in efforts to boost the Bahraini economy and share its natural-pearl heritage. High-end European clients are well-versed in natural pearls, but Americans, by and large, are not.

Cultured pearls represent 99% of all pearls sold in the US, according to the Cultured Pearl Association of America, though the country’s wealthy elite also understand non-nacreous natural varieties like the conches and melos available at the most upscale stores. (These have a different structure than nacreous pearls, resulting in a porcelaneous surface rather than the sheen of nacre.)

Of course, auction houses offer oversize individual nacreous natural pearls and strands — such as La Peregrina, a historic drop-shaped pearl that sold at Christie’s in 2011 for $11.8 million. But in the mainstream US, natural nacreous pearls simply have not existed. One would need to scout estate jewelry merchants and European dealers to find older specimens, or travel abroad to acquire newer ones in Middle Eastern jewelry.

DANAT and the Bahraini government want to make the nation’s loose natural pearls more widely available, including in the US. To that end, Rapaport plans to hold natural-pearl auctions this year and will be announcing dates in the near future. Jamsheer is optimistic. “We expect the positive intent of our outreach to elicit a beneficial experience for sellers and buyers,” she says.’

Image by moritz320 from Pixabay