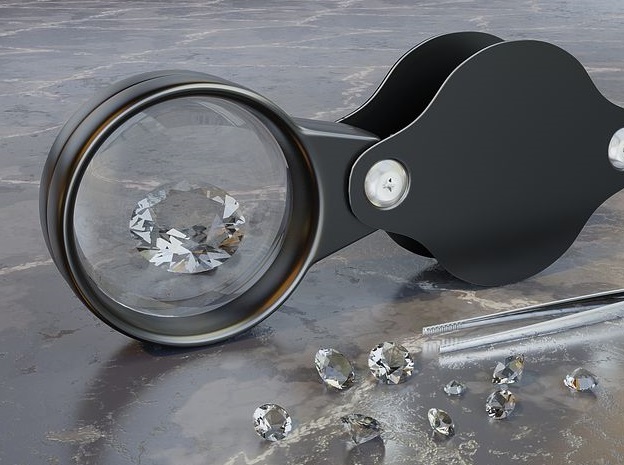 “In this latest NCDIA report, ROBERT BOUQUET covers key events and developments through July to August, and provides some insight into the near-future of the diamond trade.
What a whirlwind the diamond trade has experienced over the last few months! This latest update from the Natural Color Diamond Association (NCDIA) will cover the key events and developments, as well as provide some hypotheses on where the near-term future of the industry lies.

“There is a long road ahead before we can exit the full global effects of COVID-19; while vaccination programmes have rolled out extensively across wealthier nations, progress has been far slower in less developed countries.”
It has been suggested that once pandemic was over, the diamond trade would see a strong rebound as the resilience of the industry, supported strongly by the policies of the two major diamond producers – De Beers and Alrosa – was evident.

Clearly, there is a long road ahead before we can exit the full global effects of COVID-19; while vaccination programmes have rolled out extensively across wealthier nations, progress has been far slower in less developed countries.

Yet what we have seen, in terms of a rebound, over the past months has surpassed the predictions of many commentators and industry players.

As we enter the Northern Hemisphere summer holiday, the diamond market has been booming, liquidity remains healthy, polished supply is tight, prices are rising, and expectations are high.

Business is booming: From mine to retailer

Virtually all diamond miners should have enjoyed 2021. Against a backdrop of strong rough demand and consistently increasing rough prices, sales have been extremely strong for all players, irrespective of the type of goods produced.

Rough prices have increased in 2021 by anything between 15–40 per cent, depending on the type of goods, the producer, and whether you observe the primary or secondary rough markets.

As an example, De Beers has increased prices five times in the past eight months and its overall price book is up by 14 per cent in that same period.

“Rough prices have increased in 2021 by anything between 15–40 per cent, depending on the type of goods, the producer, and whether you observe the primary or secondary rough markets.”
Of course, this means that some categories have increased by far more than 14 per cent; the level of premium material on the secondary market for box-trading is another matter though – with such a hot market, boxes are trading at 10-20 per cent above list price.

For smaller producers who predominantly sell through tenders and auctions, sale events are fully attended, and rough demand is such that almost everything sells at record prices.

Weakness in smaller sizes and brown diamonds remains, but even here demand is better than usual.

There are a few miners who are still experiencing difficulties, either because of COVID-driven halts to production, marginal production – which existed pre-COVID – or non-market related issues such as local politics or operational challenges.

Overall, though, this is an extraordinary time for diamond miners.

How long the market can keep going up at this pace is debatable. We may have peaked, and there are signs of a slight slowdown in the price surge.

The summer break will give everyone a breather and we look forward to resuming activities at the end of August.

The factors in play

So, the rebound is on. But why is it happening with such force?

Supply constraints – De Beers and Alrosa repeatedly state that they do not have the usual stock levels and are therefore limited in their sales volumes. I think that the more recently adopted strategy of price over volume is being continued – deliberately withholding volumes has been shown to support the market and keep demand strong. There is an element of speculation on expected further rough price increases too.

Polished demand – As the world exits the pandemic, luxury sales in the major markets are back with a bang; in a recent report, Bain & Co. noted the surprisingly rapid luxury market recovery, ahead of its earlier predictions.
Short-term volatility aside, the future prospects for luxury look excellent. Polished prices are being forced up, firstly by polished demand and secondly by much more expensive rough being now translated into the only available polished.

Retail dynamics – Retail adapted to more online sales during the pandemic; this trend is set to continue, and not just as a replacement for bricks-and-mortar, but rather as a complementary sales channel. Sales in the key markets of the US and China have returned strongly to pre-COVID levels, and the major players in both markets are reporting extremely strong returns to business and optimistic forecasts for the near future

However, the real market opportunity for the diamond industry lies in the massive, global emotional outpouring that will follow the eventual return to normal life.

It is impossible to write about the diamond market without mentioning the mass of large stones that are being reported on a consistent, almost weekly basis – mega ‘rocks’ are seemingly pouring out of the mines.

As an industry insider, it almost feels too like too many large stones!

It’s strange to say, perhaps, but we have never seen so many large diamonds produced and publicised. Yes, production will decline in the future, but right now we are in the middle of what I call a ‘big stones bonanza’.

In the past, hearing about a 300-carat stone was major news; now, that is almost a weekly event. These days we get news releases talking about stones above 1,000 carats – yes, really.

This trend could easily continue for another 10 years. Careful marketing of such stones will be to avoid a significant decline in prices. Although mega rocks for the masses might not be on the cards, it is a large number of exceptional stones for the world market to absorb.

It has been an exceptional period for fancy colours, both in terms of rough diamond recoveries/sales and polished sales.

An outstanding stone was recovered by Petra Diamonds at the Cullinan Mine in South Africa; a 39-carat Type IIb blue diamond. It must be said this is one of the most beautiful, rarest and most valuable stones in the world.

The rough stone was sold by tender and purchased by a consortium of De Beers and Diacore for $40.2 million – more than $1 million per carat. We wait excitedly for the unveiling of the polished stone in due course.

De Beers previously owned the Cullinan Mine which has long been known as the main source of blues in the world, and of course large Type IIa white stones.

Despite the recent mega rocks from Debswana and Lucara, Cullinan still holds the record for the largest-ever diamond produced.

De Beers sold the mine to Petra in 2007, and the irony is not lost that De Beers now buys stones from its former mine in partnership with Diacore. This begs the question – why?

We are seeing a new form of upstream sourcing of fancy colours by a non-traditional player with extremely deep pockets.

This is not the first time they have done this with Petra blues; in December of last year, De Beers and Diacore purchased five others – also for just over $40 million.

De Beers is the only diamond mining company that is also a diamond retailer at the consumer level, while Diacore has its own trading channels and long-standing experience polishing Cullinan blues.

This perhaps heralds a change in the trading of special fancy colour stones, where the traditional traders are no longer in the game and this market is now cornered by De Beers and the like, and the stones have a new route to market.

Meanwhile, just before writing this article, news broke of the recovery of four exceptional fancy pink diamonds from Lucara’s Karowe Mine in Botswana.

The largest stone weighs a massive 62.7 carats and is the biggest pink ever officially recovered in Botswana. Three other stones – 22.21 carats, 11.17 carats and 5.05 carats) were recovered along with the main stone.

They were probably all part of one bigger original stone that was broken during recovery.

The colour in the photo is not confirmed, but regardless this is nothing short of an exceptional discovery. Congratulations once again to the team at Lucara.

And there are plenty more incredible fancy colour stones being unearthed.

Namakwa Diamonds recovered the 21.86-carat Pink Palesa diamond at its Kao Mine in Lesotho (pictured below).

And of course, the final Rio Tinto Argyle Pink Diamond Tender, which is due to close in September, must be mentioned. This is the end of the road for Rio and its pink production, but not the end of the market for pink diamonds, as old stones are already being re-marketed to capture the strong demand for these iconic fancy coloured stones.

This year’s leading ‘hero’ stone, as Rio Tinto likes to call them, is a 3.47-carat fancy intense pink radiant cut.

Finally, the 204-carat fancy intense yellow cushion modified brilliant cut, from the Diavik Mine in Canada and name the Dancing Sun, was sold at Christie’s to Diacore for $4.95 million.

– Alrosa’s 2021 production is forecast to reach 31.5 million carats
– The Ellendale Mine in Australia has a new owner and will resume mining; the mine produces a high proportion of fancy yellow stones
– Global rough production (Kimberley Process figures) for 2021 were $9.24 billionn (-32%), 107 million carats (-23%), and $86 per carat (-12%)
– On and off COVID-19 restrictions in India are disrupting the polished supply chain
– The Gemological Institute of America (GIA)’s turnaround time in India has also slowed due to COVID-19 issues
– Moët Hennessy Louis Vuitton (LVMH)’s jewellery sales figures have been boosted by the inclusion of sales from the recently-acquired Tiffany & Co.
– Signet Jewelers – the largest operator of jewellery retail chains in the US – is very upbeat, predicting full year revenue of $6.14 billion (an increase of 17%)
– In Mainland China, diamond jewellery retail is booming with positive results from the major chains
– Hong Kong sales are suffering from a lack of tourism due to COVID-19 travel restrictions
– In an industry first, a 101-carat D IF pear shape was sold at auction and paid for by an anonymous bidder with Bitcoin cryptocurrency valued at the equivalent of $12.3 million
– Diamond Foundry raised $200 million in April to increase its lab-created diamond production to 5 million carats per year
– Pandora has moved into lab-created diamond jewellery with a new collection
– The GIA has noted an increased level of undisclosed/misrepresented lab-created diamonds
– Disputes continue between natural diamond marketers and the lab-created diamond trade over consumer messaging

In summary, the diamond industry has had a very successful first half of 2021.

“Once COVID-19 eases, we will see another surge in diamond sales and increasing demand as the emotional reaction to the trauma of the pandemic should translate into significant diamond acquisition and gifting.”

Will it continue? Likely yes. The consumer demand rebound has not yet peaked globally and the key Christmas season should be very strong.

Once COVID-19 eases, we will see another surge in diamond sales and increasing demand as the emotional reaction to the trauma of the pandemic should translate into significant diamond acquisition and gifting.

This all points to further increasing polished prices. A little less exuberance in rough purchasing would be sensible, but the rough market often has a life of its own!

Overall, the indications for the diamond market are extremely positive. I look forward to commenting further later in the year.”